Home > Learn > Equities are too Risky and Should be Avoided: Grand Illusion #4

Equities are too Risky and Should be Avoided: Grand Illusion #4 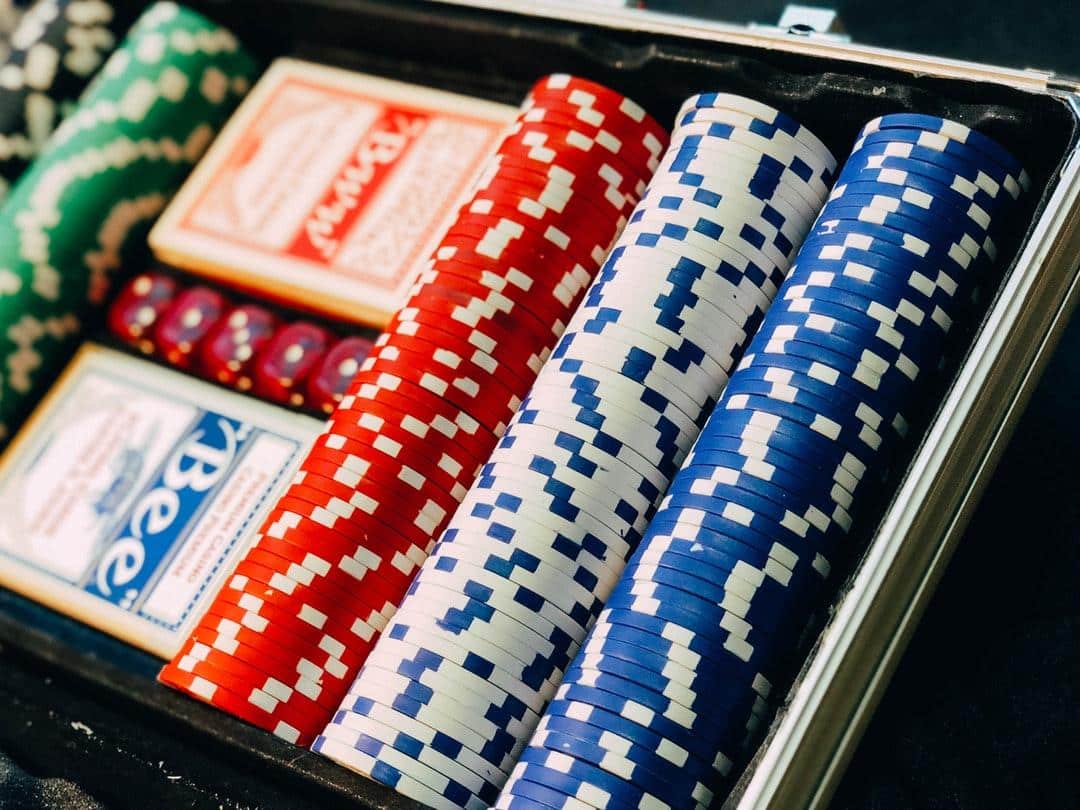 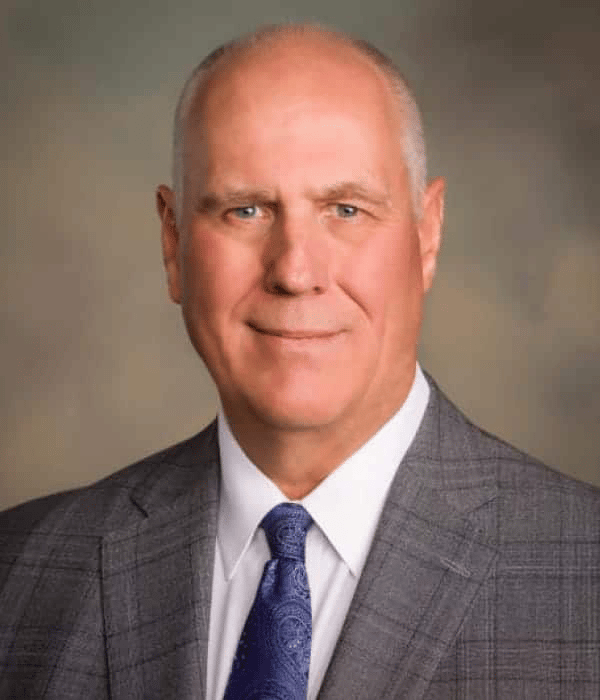 The final investing myth, or grand illusion, that Scott Peterson covers is on if equities are too risky and should be avoided. The main focus of this blog is on the bear and bull markets and how they have performed. Make sure to visit the other three grand illusion blogs located at the end of this blog.

It happens all too often. The office receives a phone call or an email from a nervous investor who has been surfing the internet or watching their favorite news network. They’ve come across an article, a headline, or an advertisement proclaiming that the stock market is poised to drop by some cataclysmic amount. Further, the advertisement promotes the idea that the stock market is a high-stakes gamble, a roll of the dice, and is certainly rigged against the “Little Guy.” We are told by these frightened investors that these warnings must be credible. “After all, they are advertised on Fox News,” and these warnings “are all over the internet!” It’s an amazing phenomenon to watch the power of the media as it turns otherwise rational people into devout believers that the apocalypse is on our very doorstep.

The promoters of this brand of financial pornography are especially troubling. They prey on the uninformed and the most anxious investors of our society. They dupe the very investors that probably have the greatest need to own inflation-beating investments. Scaring the already apprehensive investor into purchasing high-commission products that will “keep their money safe” from stock market corrections is their modus operandi. Certainly, their articles, advertisements, and headlines are provocative. They are masters in the art of deception as their message distorts reality and is damaging to those who fall under its influence.

Anybody who understands investing knows that, in the long run, the only way you will be able to maintain the purchasing power of your money is to become a partial owner in a collection of the most profitable companies the world has ever known. In other words, you must own equities if beating inflation is your objective. The price the investor pays for superior, inflation-beating returns is short-term volatility. The stock market has been and always will be volatile. Those who are deceived by the grand illusion that equities are too risky and must be avoided fail to discern the difference between volatility and risk. Few people can make this distinction, but that is precisely the reason why few investors prosper.

Volatility is the advent of a temporary decline, while risk refers to the chance of a permanent loss. Properly understood, “volatility” is merely a synonym for unpredictability: it has neither negative nor positive connotations. It is worthwhile to take a minute and review the volatile history of the stock market as measured by the S&P 500 or large company stocks.

Remember, a bear market is a drop of about 20% in value from the market’s previous high. This phenomenon is not something that is unusual or unique, bear markets are as common as dirt. As you can see from the chart below, in the seventy-three years since World War II, there have been 13 bear markets. They come around about every five years on average. These declines vary in their severity, frequency, and duration, but on average, the stock market retreats a little over 30% in a bear market. They last on average about 15 months, then the stock market rebounds and moves on to new highs. Given the very real possibility that your retirement could last two or three decades, you’ll be a participant in five or six bear markets during your retirement, so you might as well get used to them. 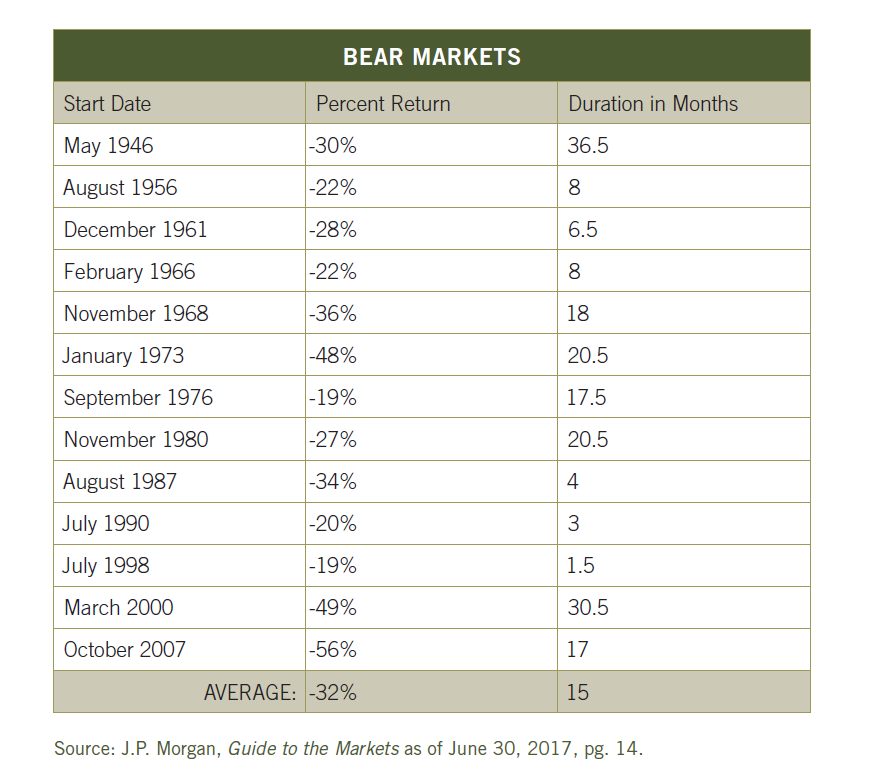 The biggest issue with bear markets is fear. Not fear of what the stock market is doing, but fear of what the investor is doing. Peter Lynch, the fund manager for the highly successful Fidelity Magellan Fund throughout the nineties, said, “The key to investing in stocks is not to get scared out of them.” You must not abandon equities when they are down because as sure as bear markets are to come, bull markets will surely follow.

Included below is a chart that shows all the bull markets since World War II. As you can see, most investors are missing the point. Instead of worrying about avoiding the next -30% bear market, we should focus our attention on making sure we participate in the next 300% bull market! 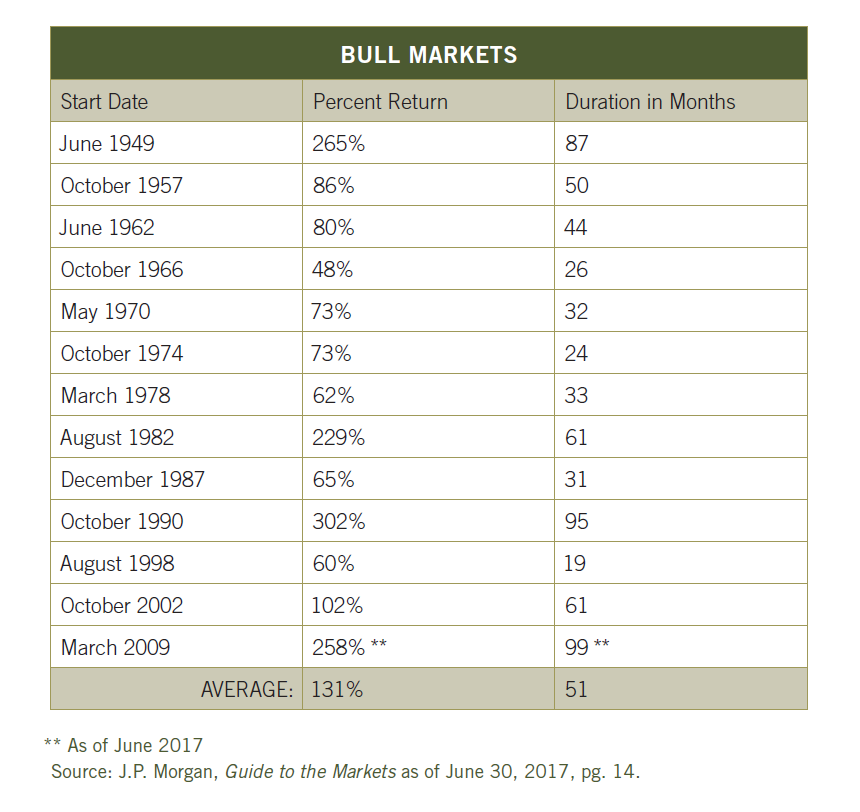 As mentioned in our blog on market timing, it is an exercise in futility to try to guess when to be in or out of the markets. The key is to be disciplined and to stay invested. Since 1945, or the end of World War II, the S&P 500 has averaged an annualized rate of 11% including dividends. Another way of looking at this, if you could have invested $1,000 in the S&P 500 in 1945, that $1,000 would have grown to more than $1,800,000 today. A handsome reward for staying invested.

The Masters of Misinformation

Instead of teaching the public the virtues of investment discipline and sharing a historical perspective of investing in equities, the purveyors of this grand illusion that the equity markets are dangerous and should be avoided design advertising campaigns to reinforce the irrational fears of the financially ignorant. They fail to provide a historical perspective that a diversified portfolio of U.S. stocks has never gone down without fully recovering within a relatively short period of time. Never. Nor do they reveal that in a diversified portfolio of stocks, such as the S&P 500, the only way to lose money is to sell when the stock market is down. Not so coincidentally, this is exactly what they suggest you do to free up the cash to buy their “safe” products. The promoters of these sleazy enterprises profit only when you panic. They win only when you choose to lose.

So, who are the promoters that benefit from this grand illusion? The answer is simple. Any entity that benefits from frightening people out of equities is a co-conspirator. The companies that profit when you panic are predominantly the sellers of precious metals and annuities with the financial media assisting as a loyal partner in crime. For as they say in the news business, “If it bleeds, it leads.” Frightening, sensational, and exaggerated headlines and stories touting the demise of the stock market are the tools they employ to promote their ratings and sell their products.

In an accompanying blog, we look at the world’s worst investments. It may come as no surprise that in our estimation, the world’s worst investments are precious metals and index annuities. These historical underachievers are bought only by the fearful and ignorant. These products have horrible performance histories and are purchased only because, as Jeremy Siegel was quoted to have said, “fear has a greater impact on human action than does the impressive weight of historical evidence”. Unfortunately, experience has taught us that Mr. Siegel’s quote is entirely accurate.

Peter Lynch said, “Far more money has been lost by investors preparing for corrections, or trying to anticipate corrections, than has been lost in corrections themselves.” Think about this. Some investors are more than willing to systematically watch their purchasing power erode, because they are afraid of the pain associated with a temporary stock market correction. They are willing to pay unbelievably high fees to insurance companies that sell annuities with the promise to protect their money should the stock market crash. Some investors willingly throw money at the poorest of investments and subject their money to the promises of the shadiest of characters before they allow their money to be exposed to the temporary fluctuation in price of a share of the most profitable companies the world has ever known. The fearful investors are so focused on missing the next bear market that they willingly skip out on one of the most profitable investment opportunities ever made available to mankind: investing in equities.

Certainly, there will be temporary periods of pain and discomfort from investing into equities, but the pain of owning a well-diversified portfolio of equities has always proven to be temporary, and the long-term results have always been able to protect purchasing power.

Investing is more of an emotional exercise than it is intellectual. Those who can harness their emotions during volatile times, and not fall prey to the peddlers of doom, will be successful. Those who lack the emotional maturity to be a disciplined investor will forever struggle. The antidote to fear and panic is having a plan. Every investor needs to have an investment goal in mind when investing and then they need to create an investment portfolio that matches their future income needs. Without a goal-driven plan, emotions drive our investment decisions and emotionally charged investing will never produce a good investment outcome.

Welcome to the Grand Illusions

Grand Illusion #3: The Persistence of Performance